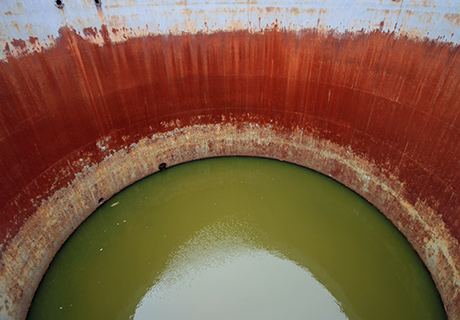 The most common way of cleaning the drinking water tank today is to hire the local sweeper or plumber. (This is many times done only after some people residing in that particular building complain of some health problems arising out of water borne diseases.) This plumber or sweeper in turn usually employs a casual laborer to get the tank cleaned.

This laborer, who, himself on most of the occasions has the most unclean and dirty living habits, enters into the tank with a brush or a broom, (the same brush or broom which is used for cleaning the gutters and toilets.) and scrubs manually the walls and floors and only sometimes ceiling of the drinking water tank, using the same dirty water that is remaining in the drinking water tank.

After this he physically removes water and the sludge from the tank using a bucket, mug and mops the tank to only show the residents the tank is clean. He sometimes uses bleaching powder or detergent (which proves to be harmful in some cases) for cleaning the tank. This process in the first place is very laborious and the cleaning is very ineffective as there is no guarantee that person scrubs the tank to remove the dirt is using his full strength.

Secondly, even after so-called thorough cleaning by them, the disease causing bacteria still remains in the tank giving full scope for their further development and multiplication in the drinking water tank, to make the drinking water risky for human consumption. Thirdly, the people who normally do these cleaning jobs are untrained casual workers who usually do not have any sense at personal hygiene and they themselves could be the source of contamination of the drinking water tank.

Against all above serious demerits of the prevailing conventional methods of cleaning the tanks the only advantage which we think probably is, the cheaper costs of such unprofessional cleaning. We feel this would be about 30% to 35% cheaper than our unique professional method of cleaning the tank. But if one has to think of the long term serious repercussions and consequences of the present co.